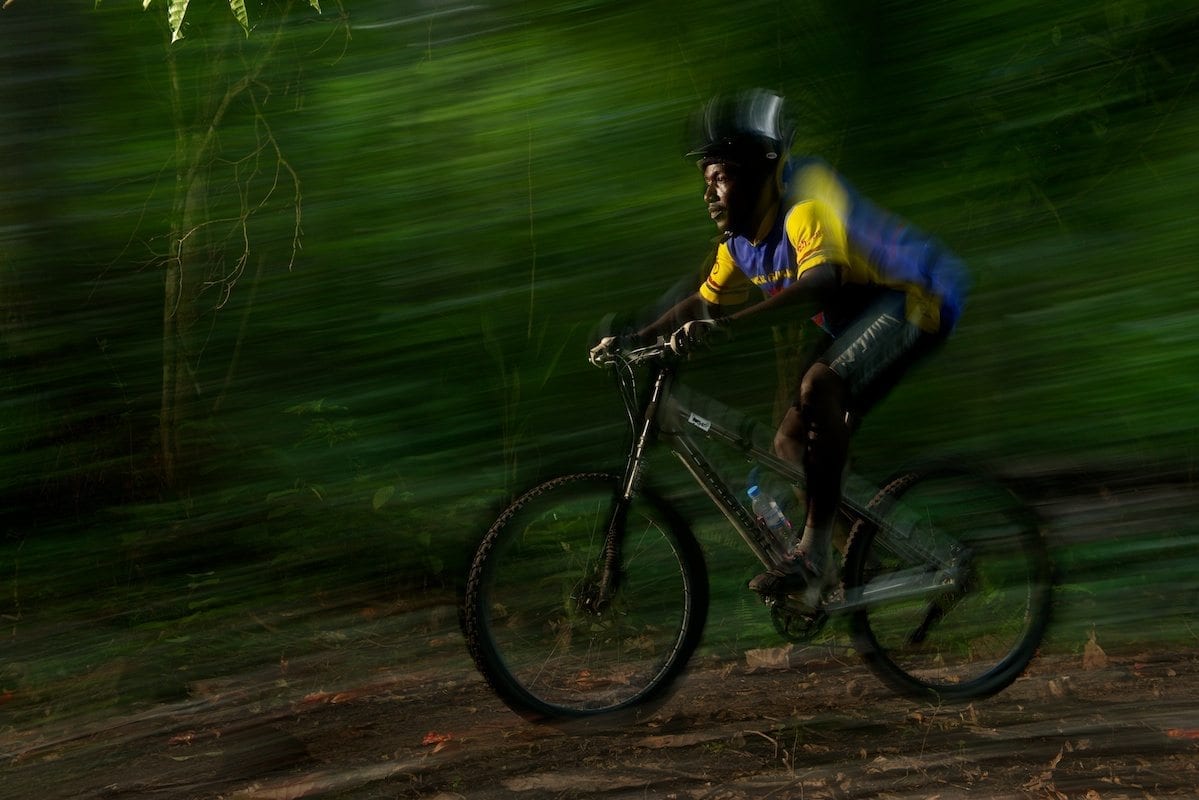 Day Four found us on a boat heading over to Anse Mamin. Deep in the jungle and far away from the promised trade winds in around the island, we got to play with an entirely new set of challenges.

Catching a Boat in Saint Lucia

Early in the week, I heard a warning about taking a water taxi to leave the resort for town.  Some of the boats were fine, others were floating dens of iniquity, or something like that. Places to buy drugs, get hustled, etc. Not knowing which boat was worth trusting, I tended to avoid them while I was at Anse Chastanet. Besides, I was perfectly happy at the resort.

Sometime during the week, I heard a bit of a concerning story about two teenage girls who got on the wrong boat. Seems everything worked out fine, but I’m sure their parents were quite out of their wits for a moment.

There were no such worries for our excursion up the island to Anse Mamin. We boarded on the dive boat and they shuttled us off to our location for the afternoon. Got my toes wet and that was the most dangerous part of the boat ride.

Anse Mamin and the Jungle Bikers

That title sounds like it could be a Reggae band.

We hiked a bit inland, far enough to feel the breeze disappear and the humidity of a jungle take over. It didn’t take long before I was soaked with sweat. We anticipated problems with mosquitos and I was worried that my bug spray was running off with my perspiration, but I only saw one mosquito land on me during the entire visit. There was a different villain in the jungle, though.

Big, ferocious ants. Teeth the size of Saber Cats. Cali got bit and went down. Then Brian hot bit later, another man down. Little buggers didn’t pester me once. I take that as a stroke of luck, because the other guys really seemed to get nailed by those biting little buggers.

We’re up here to shoot motion – panning the bikers. Slow shutter speeds to get motion and some flash to keep parts of the image sharp. Sounds lovely.  Never done this before in my life, but that’s why you go to workshops. Time to try new stuff.

The setup was pretty simple. There were two SB-910s on a stand to camera left to hit the oncoming bikers arriving from the right.  Why two flashes? To get the same volume of light, but at lower power output. The lower the power output of the flash, the shorter duration of the flash. In other words, lower flash power equals a better opportunity to freeze the subject in motion.

Another flash was on top of my camera, both to trigger the two flashes to the left and to fill in the side of the subject.

There were two ways to handle the focusing issue. Joe showed us how to change the Nikon auto-focus into 3D mode and also change a few other settings. I didn’t even know I had a 3D mode. It completely freaked me out because my cursor was jumping all over the place. I honestly didn’t know what it would pick as the subject to focus upon, but I gave it a few shots.

The other option was to switch to Manual focus mode, but not until you used auto-focus on a stationary subject. Joe, ever helpful, volunteered. 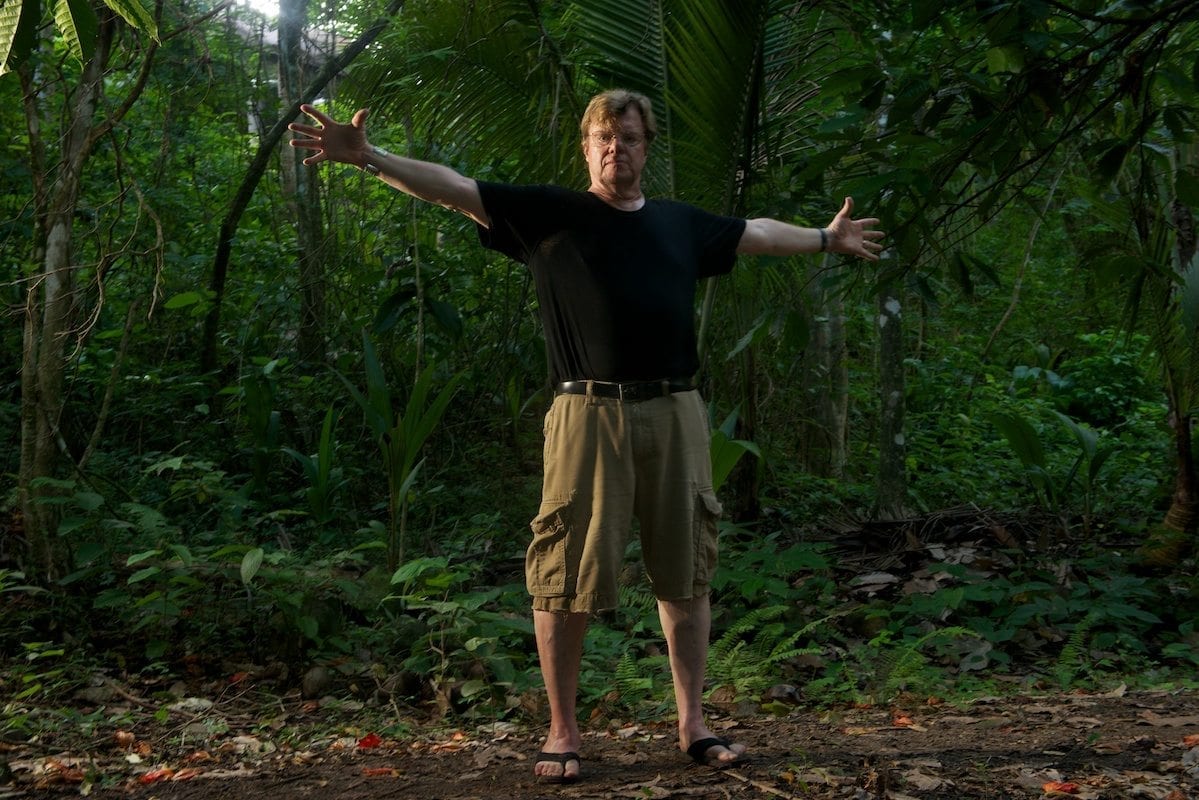 I once caught a fish this big!

Both solutions worked, but I preferred using Manual focus. One less thing to trust during the action.

Our bikers were Jovan and Jungle. Seriously, I’m in the jungle with a guy named Jungle. How surreal is that? He’s working his butt off riding up and down the mountain, yet I’m sweating more than he is out there. By this time, I was looking forward to the recycled air of a Las Vegas convention center the following week. Stale, perhaps, but air conditioned. I’ll be dodging Russian hookers instead of giant ants. We all have our environments where we know how to thrive and survive.

We each took a few turns and I was pleasantly surprised. I expected to screw up quite a bit as I’d never done this before, but I found a few shots that I liked. 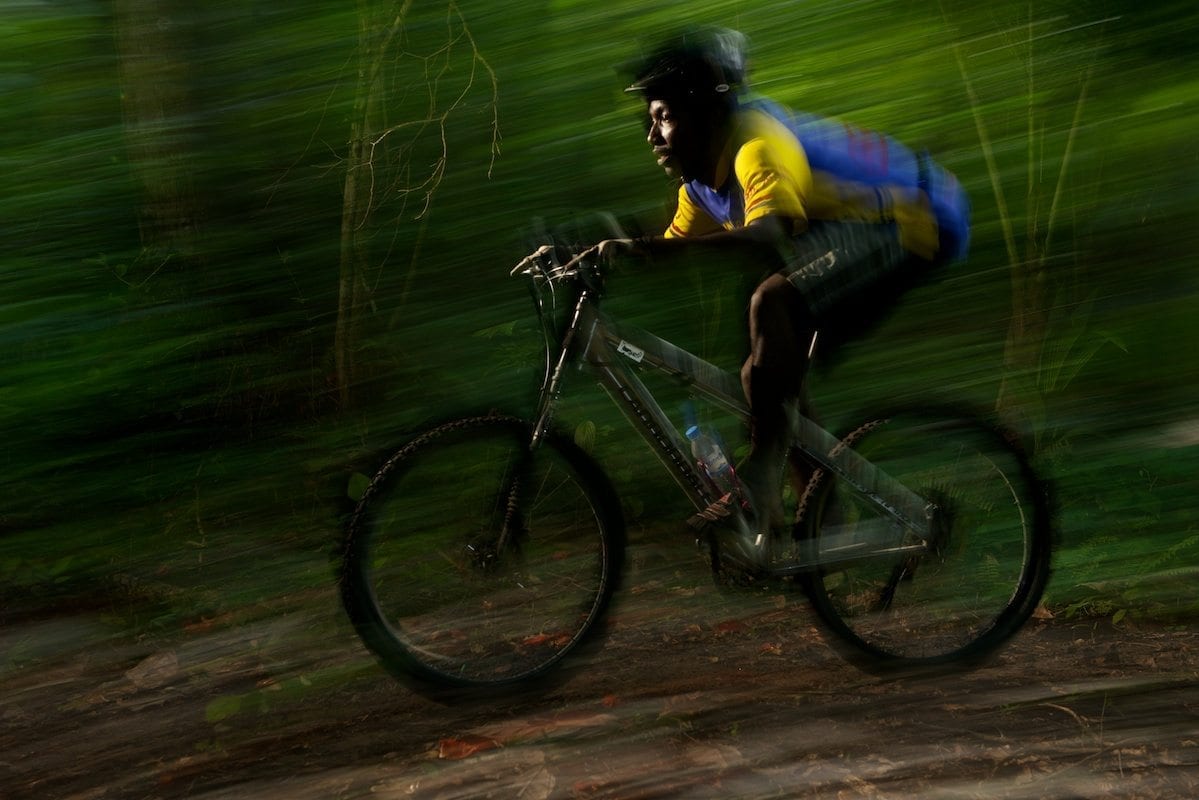 This is the kind of thing where there’s sharp, and there’s sharp enough. After all, blur is what you’re after. Without the blur, it would be a guy holding still on his bike in the jungle, and there’s nothing exciting about that.

My shutter speed was down at 1/15th and getting the motion blur was easy. What about the sharpness where you wanted it, though? Here’s a 100% crop on the rider’s face to show you how that worked out.

Click the image to see it larger. You can see the motion blur is not only parallel, but also up and down as he was bouncing on the dirt path. The dual flashes still kept his face sharp. You can see a little bit of shadow behind him, due to the on-camera flash.

Despite heat, humidity and attack ants, I really had a great time doing the motion shots. While we were shooting the bikers for these images, RC was getting some video using his quad-copter. He’s a short clip he posted on YouTube.

That clip even shows me trying to get one of these shots.  I must have half a second of screen time there.

Portraits in the Jungle 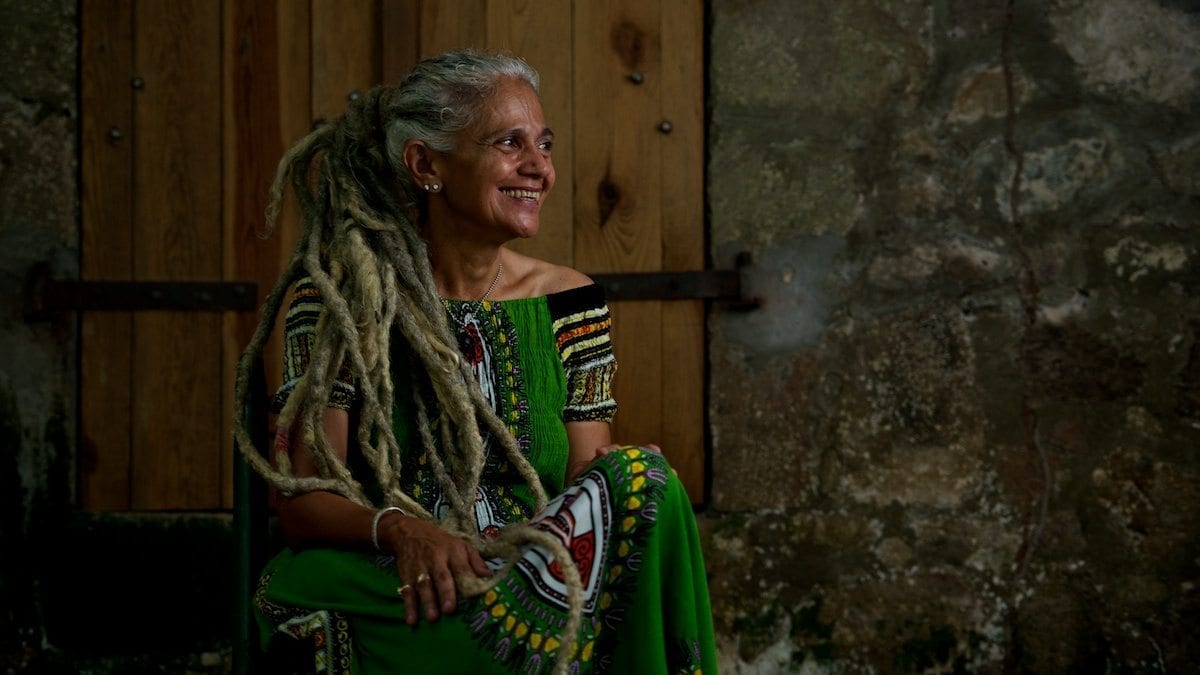 Claudette is one of those subjects that Joe finds and returns to shoot again and again. She joined us out there in the jungle, along with her guitar.

Such a joyful soul. She seemed to find amusement with all of us and her expressions showed it all the time. All this attention and fuss we made over her didn’t seem to make any sense, but she had a good time. I have a plethora of shots with those crack-up expression. Not so much to show everyone else, but to remember the fun time we had shooting with her.

Katie and I paired up again. We walked through the jungle looking for a good background, but ended up coming back to the bike shack. Joe asked about our choice, but Katie explained the same thing that I was thinking. The color contrast of her green dress in the green jungle just didn’t seem to work for us. I rather liked this spot, but we also got another chance later on in the day.

The lighting setup for this was rather simple, but still used a different modifier than our previous efforts. We had a 3×3 diffuser on a C-Stand and a single SB-910 flash shooting through it as our source. Beautiful, soft, wrapping light. I want to get me one of those 3×3 diffusers.  And a 3×6, or a 12×12.  Yes, I want it all!

Clearly, this workshop filled my head with idea of things to buy. I’m going to need a crew just to carry it all.  I digress.

HDR in the Jungle 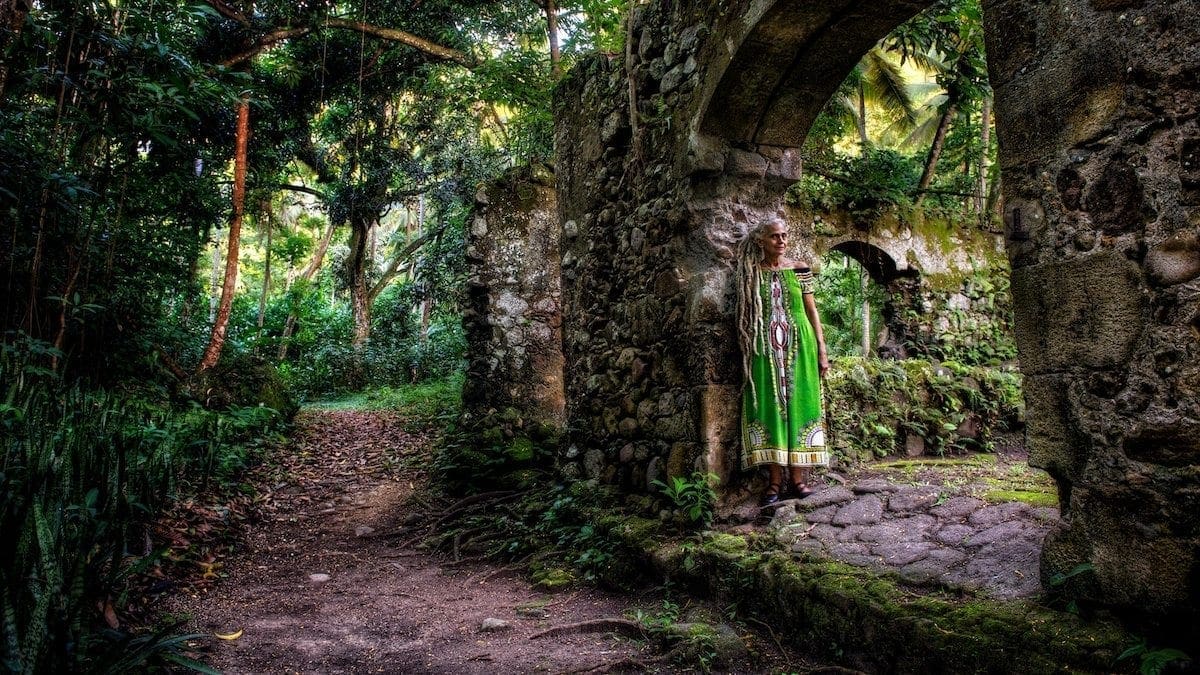 RC lead us on a short walk to capture some HDR brackets during the last segment of this excursion. The place is alive with ruins. Lots of opportunities with buildings made of stones, enormous pots big enough to boil mating elephants, derelict canons and a plethora of rotting fruit.

I shot quite a bit just for the environment, but I came across this scene and asked Claudette to pose. The idea in my head went all the way back to old Adventure games on early PCs. Very geeky. Stuff like “You’re on a path and you meet an old woman at the entrance of a castle. What do you do?” Very Zork.

Didn’t go over well in class the next day. No Zork fans there. That, and my overnight processing needed improvement.

A few others shot some portraits with her that I liked. Poor Tony picked up a coconut to use as a prop and it immediately started leaking all over the place (I told you there was rotting fruit). Brian went back toward the beach and caught a lovely image of some massive, arched doors with the sunset creeping through them. Wish I’d thought of that. Once again, it proves that you can put a bunch of photographers in the same place with the same resources, but never get the same photos from them. I love it.

Near sunset, we loaded ourselves and our gear on the dive boat. We started off, but then lingered to watch the sun sink like a stone off the horizon and await the Green Flash. Who saw it?  Some say they did. Some say they didn’t. Both were right.

The week is rapidly coming to a conclusion. It didn’t seem possible that there was only one day left. This was the most fun I’ve ever had for a week of shooting. The concepts that I learned during this week were filling my head with idea of using those techniques at home – particularly the motion blur. It’s like summer camp without the bad food and we only lost two people to the ants. 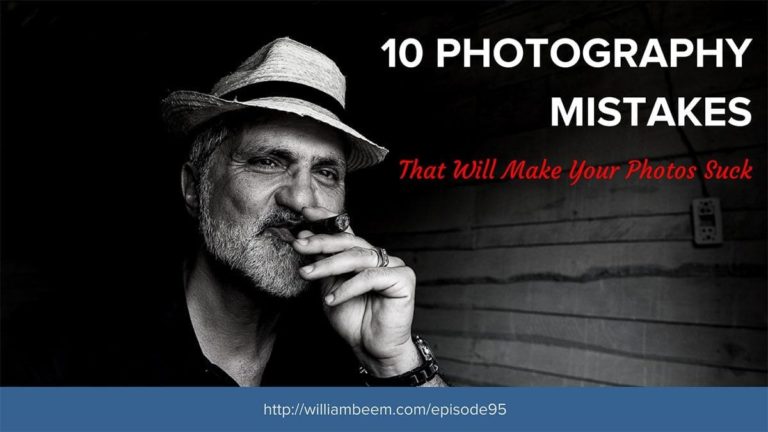 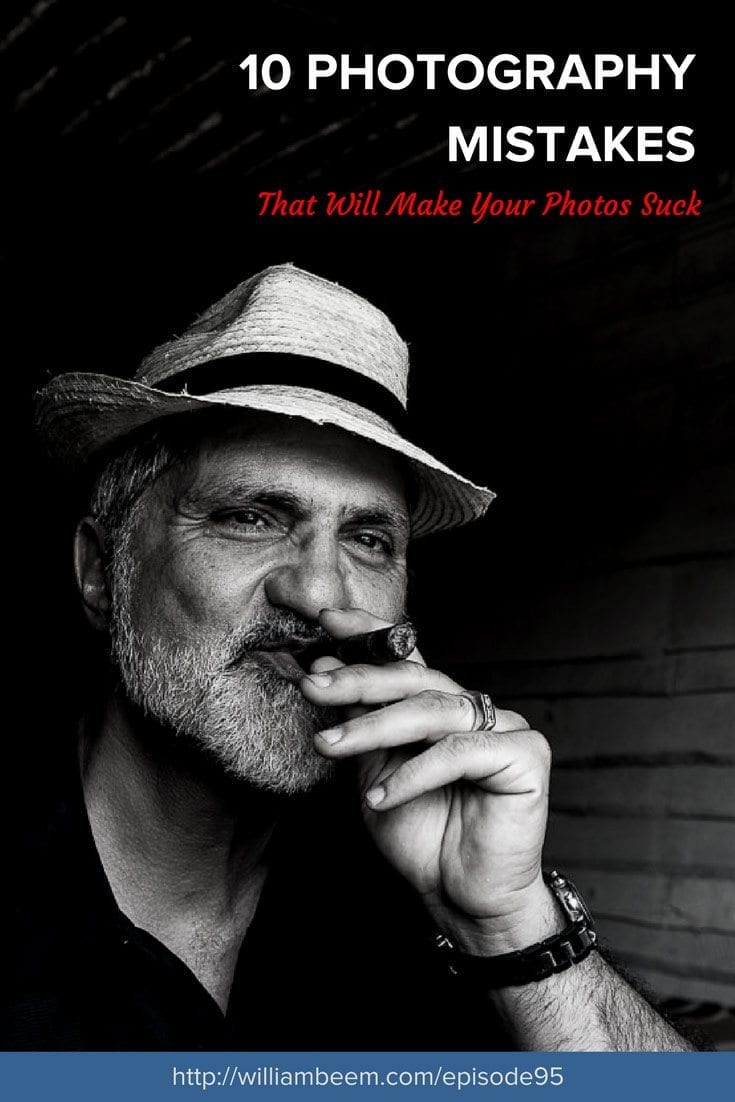 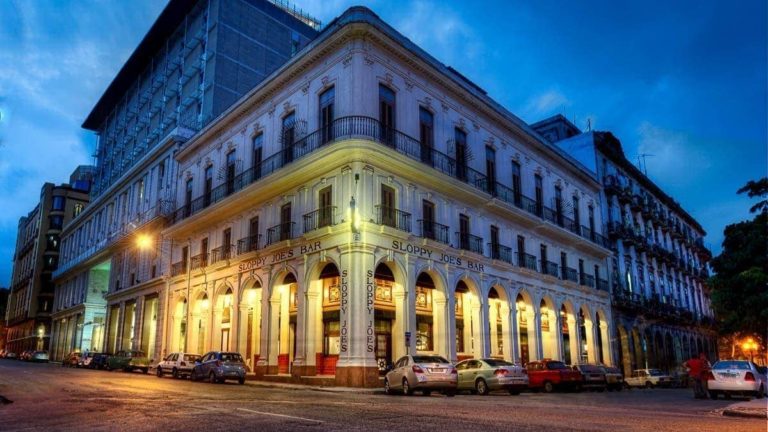 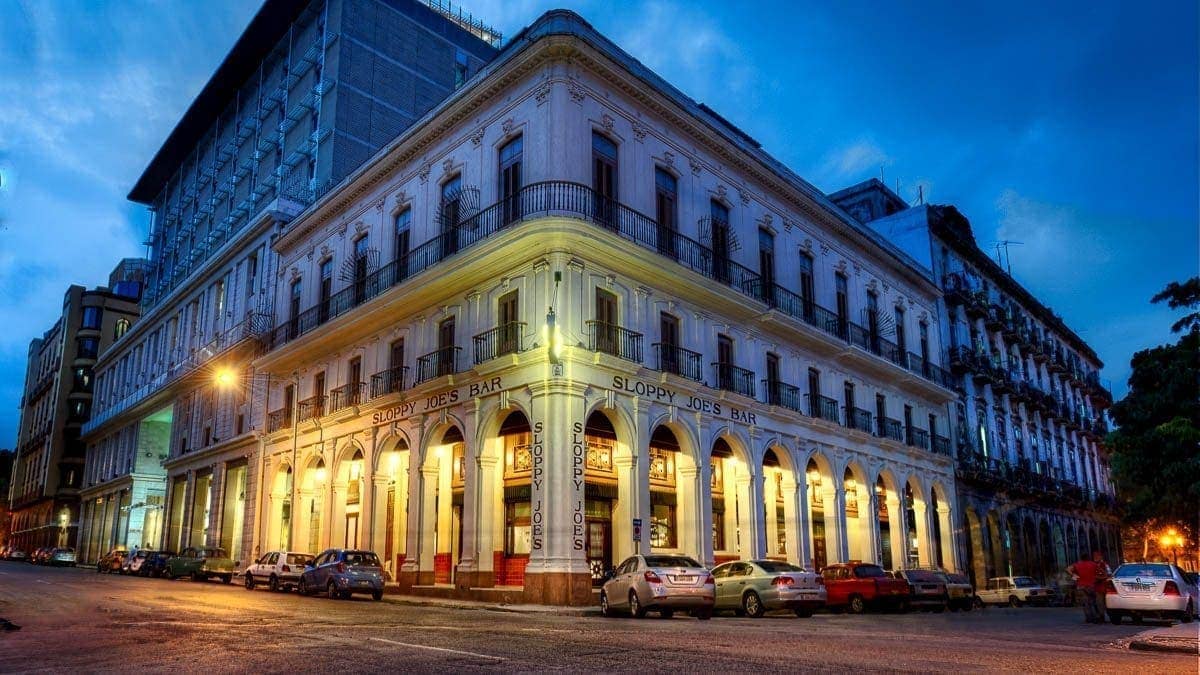 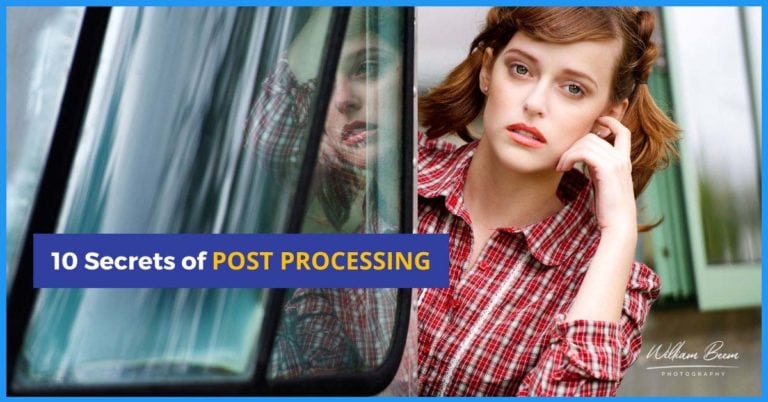 Every photo needs post-processing, even if it’s only to sharpen the photo. The biggest problem we see in post-processing is the tendency to overdo your editing. 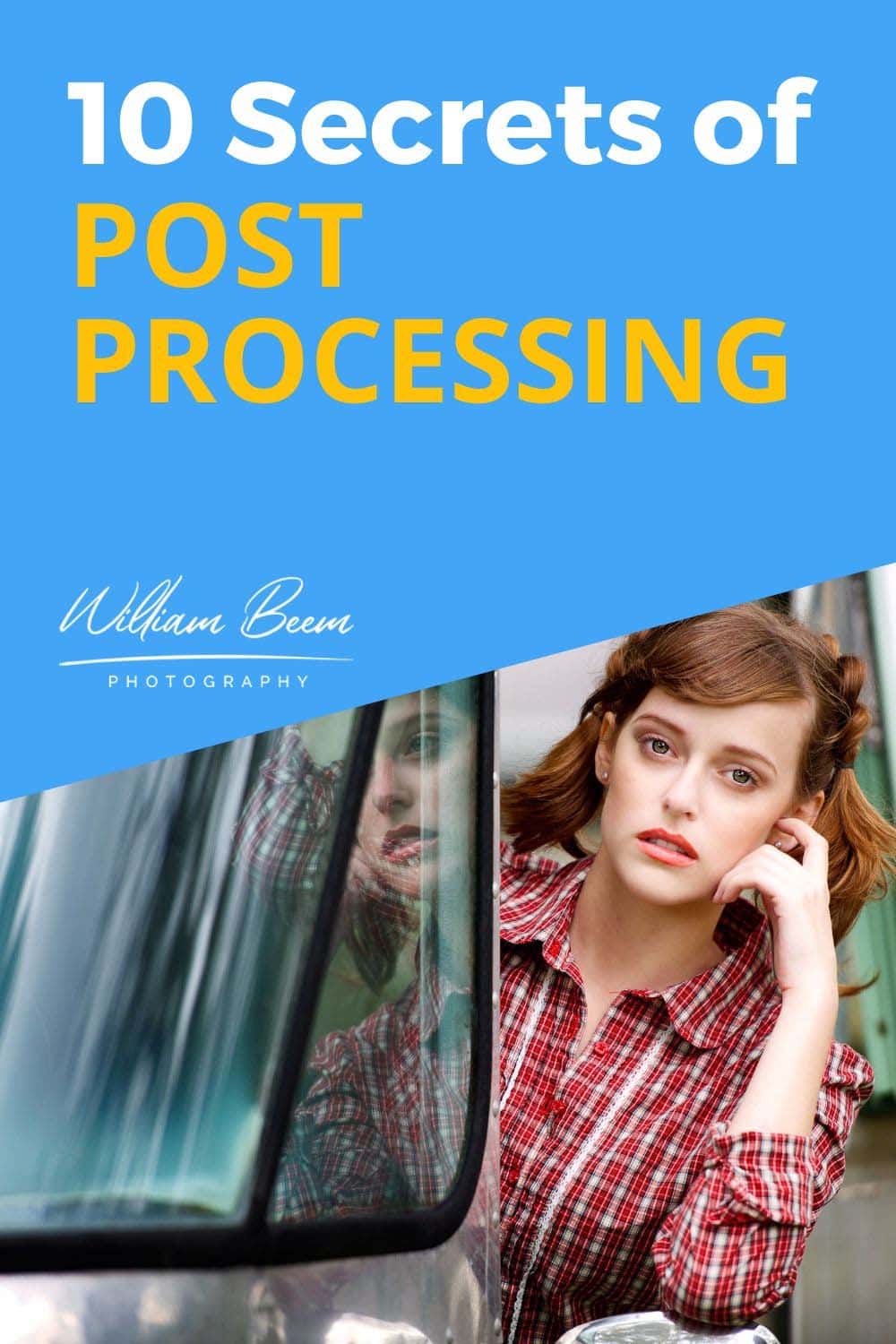 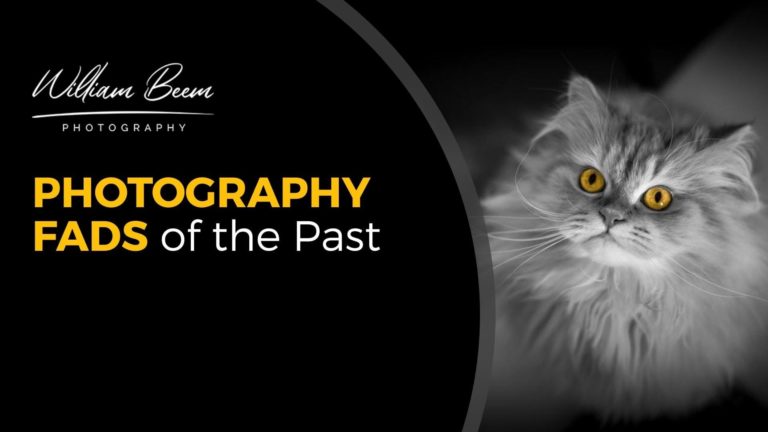 How to Recognize Photography Fads Photography fads plague many photographers, and I’m hoping that we can recognize and overcome bad photography techniques before they become photography fads. Every period in time seems to have its fads. What is a fad, anyway? I have to hang my head in shame because I’ve participated in some of… 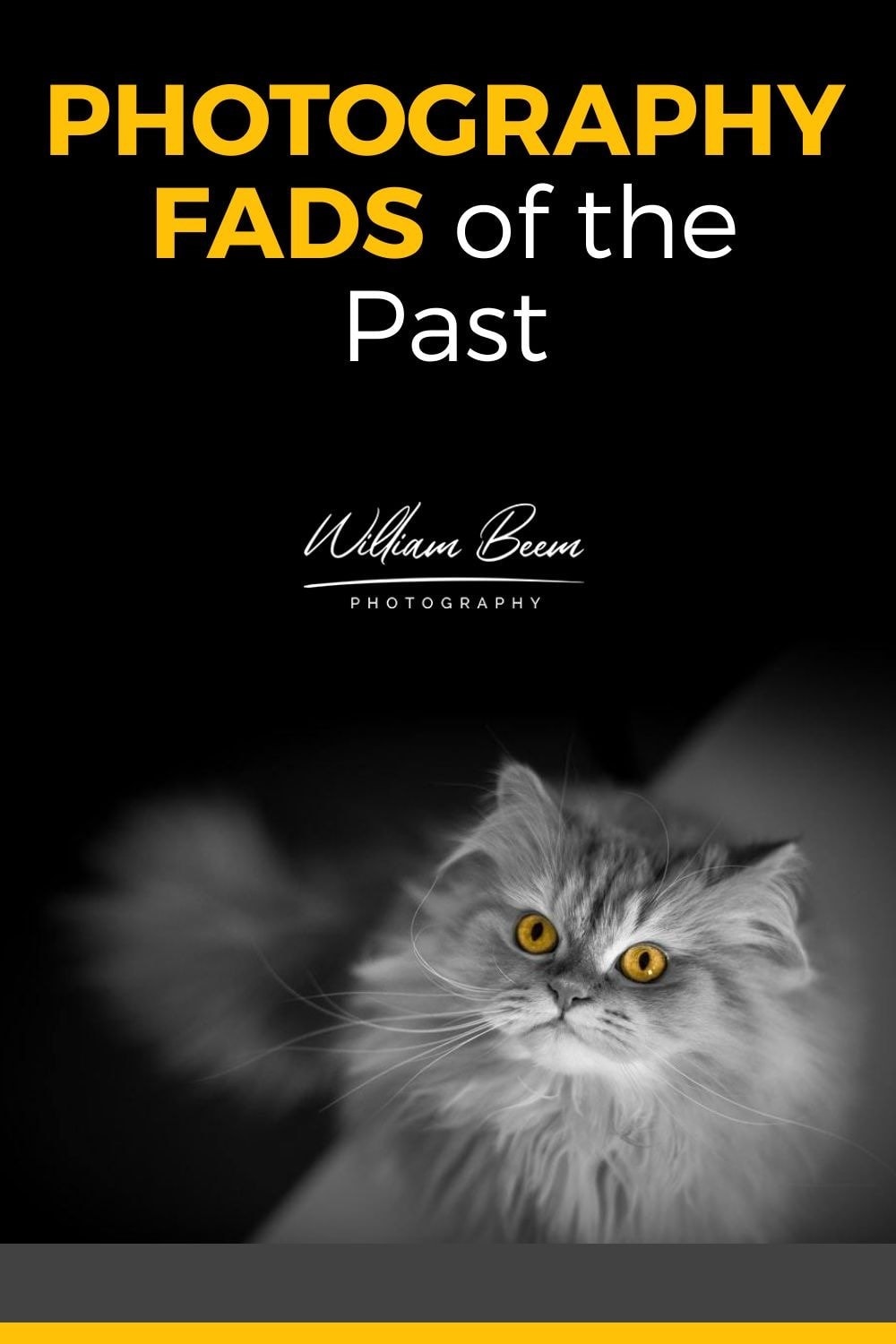 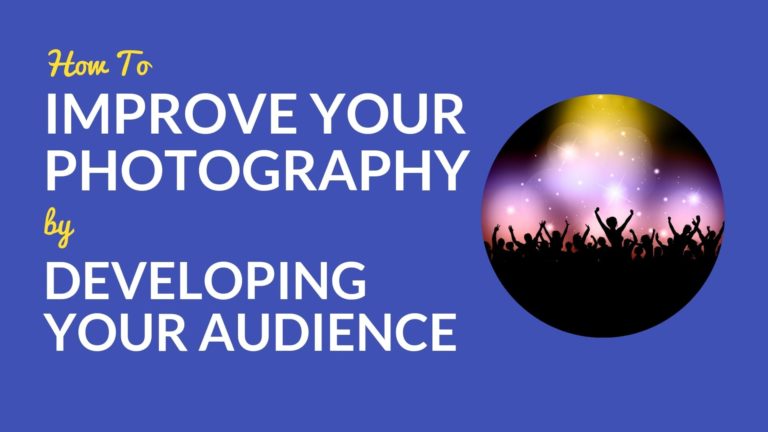 Developing your audience isn’t something you hear about from most photographers. Instead, we get the usual lines about the Rule of Thirds or advice to Fill the Frame. What good does that do if you don’t really know what you’re supposed to photograph? A well-composed photograph shown to the wrong group of people won’t flatter… 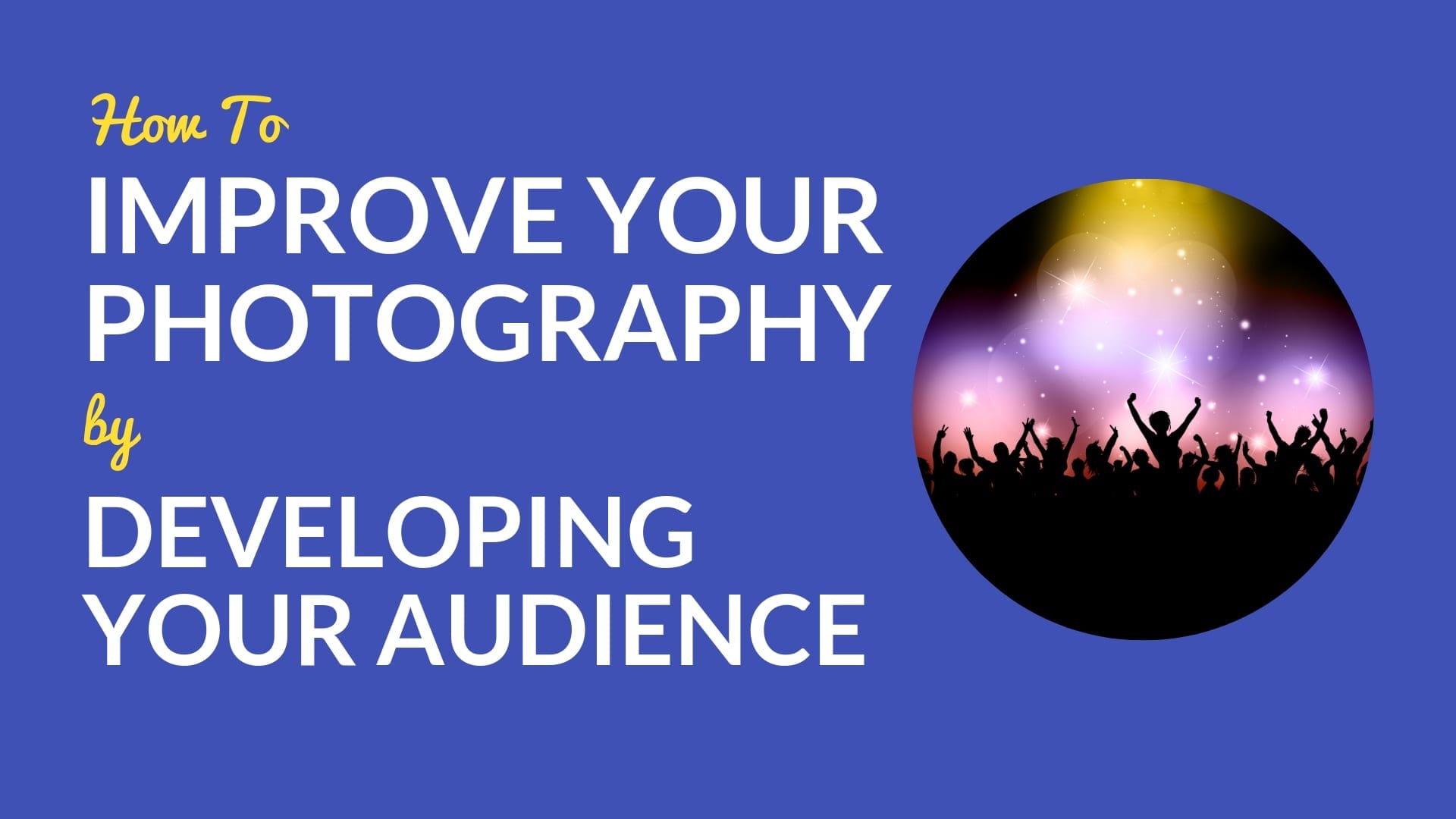