Hang around with folks using Photoshop and you’re bound to hear some discussion about using a Wacom tablet. Not just the generic subject of using a graphic tablet, but specifically a Wacom tablet. Quite frankly, people rave about these devices. They’ll tell you that it offers much more control than a mouse.  Holding a pen feels more natural than holding a mouse. A mouse can’t vary the pressure of a brush, but you can do it with a pen & tablet.  You know what? They’re right.  It’s all true.

More importantly, the results show in their images.  Perhaps I should rephrase that a bit.  The sloppiness of a mouse is more likely to show in an image, because people using a brush can get into fine details that mouse users will never understand. A Wacom pen & tablet offers precise control that’s on another plane above using a mouse.

Getting used to working with the Wacom Intuos tablet took a few days for me to adjust from using a mouse.  It wasn’t that the pen didn’t feel comfortable; it did. The thing I needed to overcome was the hand-eye coordination of looking at the screen while placing my pen on another surface. It was frustrating at first, but it’s easily overcome with a few days use.

Adapting to the Intuos5

The Intuos5 has some notable changes from the previous version. Multi-touch gestures are the headline attraction, and it may change the way you interact with your computer all the time, not just in Photoshop or similar applications. Although there were some folks who used the pen & tablet at all times, I suspect most people switched off to using a mouse for most of their needs, or a trackpad.

I was insane enough to use an Intuos4 Medium tablet, an Apple Magic Mouse, and an Apple Magic Trackpad. I often had one hand on the keyboard and another floating around these three input devices. Let’s just say that it got cumbersome to have so many things on my desktop.

All of that changed when I bought my Intuos5 tablet. It combined the services of all of those devices into one unit. The pen still serves in creative applications as it always did before. In fact, it seems even more comfortable with a matte surface, much easier to grip.  One thing I miss is having the Express Keys illuminated on the pad. Now there is a heads-up display on your primary screen when your finger hovers over one of the Express Keys.

That’s good for the folks who prefer the Small tablet size, as they never had the illuminated display. However, it’s another item that takes some adjustment to get used to looking someplace other than where you’re touching the keys.

The multi-touch gestures have completely eliminated my need for a mouse or trackpad.  I can easily move my cursor around with one finger. Two fingers allow you to scroll pages, though the tablet is finicky about alignment.  If your fingers aren’t moving up/down, then the trackpad may either try to zoom in or out, or rotate when you want to scroll.

Using two fingers to pinch or Three fingers swipes will move pages backward or forward, such as web pages or Launchpad pages on a Mac. Four fingers move through desktops on my Mac OS machine. Sometimes it gets a bit confusing for me and I’ll use the wrong gesture.  Those mistakes are fewer as I become more acclimated with the Intuos5.

Using the Intuos5 multitouch gestures for creating selections or performing drag & drop operations is different than using a trackpad on your computer.  There is no button on the bottom to act as a Click, though you can program an Express key for that purpose. Wacom provides a Gesture Guide that says drag & drop is a simple two-step operation:

The first step works fine, but the second step to drag has never worked for me.  I ended up programming an ExpressKey for Click.  Holding down that Click key and dragging with my finger works, but then both of my hands are tied up in something that used to be a single-hand action with a mouse. Fortunately, text selection and drag & drop operations are simple, one-hand affairs when using the pen.

There are many things I like about using gestures on the Intuos5 tablet, but I’m still switching to a pen when I need to select and manipulate an object.

Only the pen uses pressure sensitivity, not finger gestures.  However, that’s no different than using a trackpad or mouse, so it isn’t a setback from other input methods.

The Intuos5 tablet comes in three sizes – Wacom Intuos5 Touch Small Pen Tablet, Wacom Intuos5 Touch Medium Pen Tablet (PTH650) and Wacom Intuos Pro Pen and Touch Large Tablet (PTH851) OLD MODEL. The previous version also had an Extra Large size that will remain available, but it won’t have the multi-touch features.  My previous tablet was an Intuos4 Medium, but I decided to try the Small tablet when upgrading to the Intuos5. This decision varies depending upon how you like to work. I based my decision to use the Small size on two factors:

When you use the Small tablet, most of your moves only require bending at the wrist to reach different parts of the screen.  When using the Medium size, I had to bend at the elbow to move the pen around.  Using the Large size required even more movement. Basically, I’m lazy and like small movements.  When discussing this issue with other users, they prefer the Large tablet, particularly when using a large monitor. They felt too constrained by making small moves over such a large part of the screen.

All of the tablets have the same capabilities, so the size really depends upon the kind of reach that is most comfortable for the user. Some users buy a Small tablet for travel, but prefer using a Medium or Large at home so they can spread out a bit more.  It’s an matter of individual preference.

All in all, I felt it was a worthy successor and upgrade to the Intuos4 tablet. I’ve eliminated my mouse & trackpad and only use the Intuos5 and keyboard for input now. That forces me to use it more than I had in the past. I’m finding it’s a better input tool. My hands no longer cramp up from extended mousing around. Most of the multi gesture controls are easy and comfortable. It takes a bit of time and practice to adjust, but the results are worth it. 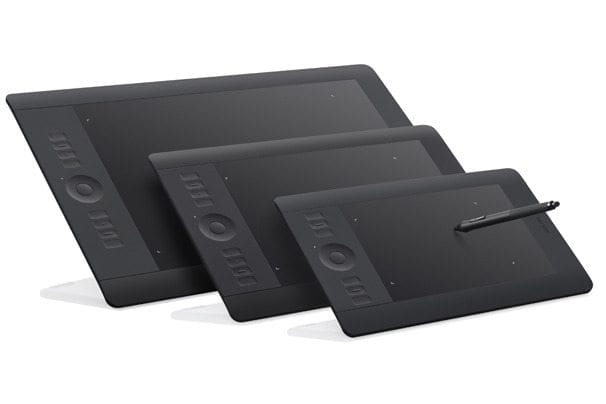