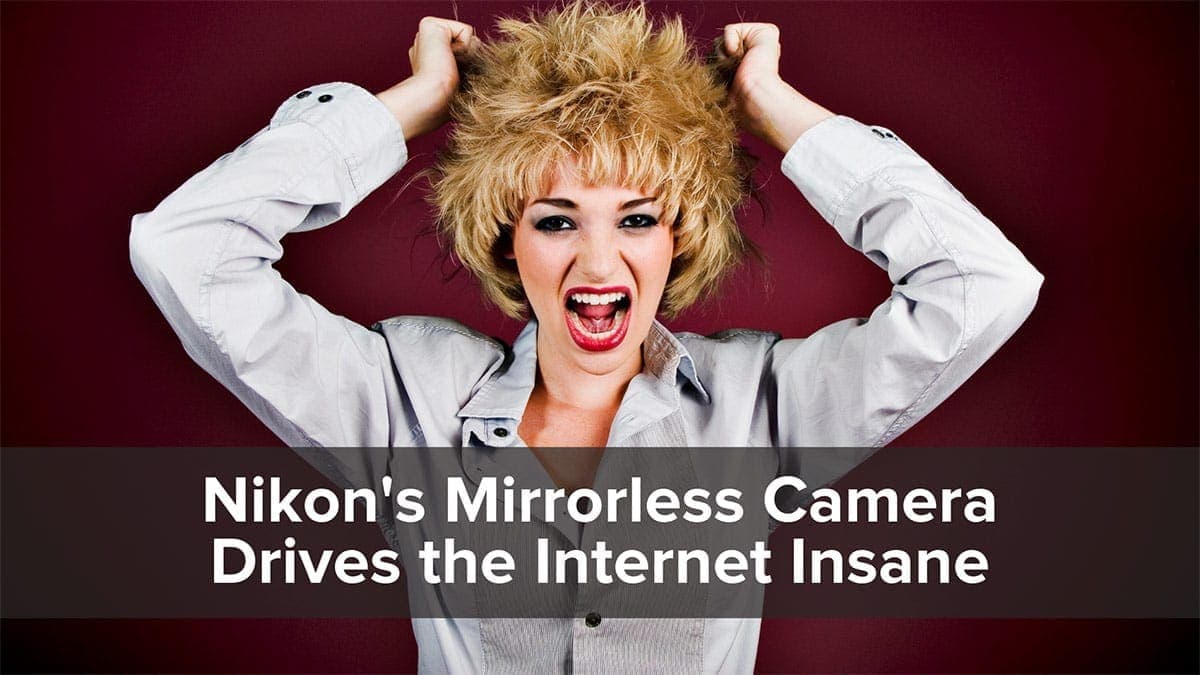 Why are the Nikon mirrorless cameras driving the Internet insane? After reading articles and watching YouTube videos of people decrying the absolute failure of Nikon with the new Z6 and Z7 mirrorless cameras, I decided I should add my voice.

Literally. I have a podcast, so you can listen to my voice (and please subscribe!).

This Episode is Not About the New Nikon Mirrorless Cameras

We're discussing the hysteria and disinformation that's appearing on the Internet because of the Nikon mirrorless cameras. People are saying it's not a professional camera because it doesn't have two card slots. Others have called for Nikon to admit defeat now and just stop trying to compete with Sony.

Mind you, these messages are from people who haven't actually touched the new Z6 or Z7 yet, in most cases. They're reading specs and watching videos from those who went to Nikon's event to reveal the cameras.

When I watch those videos, I find people reporting a mix of information. Some features truly impressed them, and others made them question Nikon's decisions.

Are Photographers Ever Satisfied?

The release of the new Nikon mirrorless cameras played out much like a new Star Wars movie. There was a lot of speculation. Some photos and information leaked out. People on the Internet speculated what the result would be.

Then they cried for bloody murder when the release product didn't match what they imagined it should be.

Those who are predisposed to like Nikon generally seem happy with the Z6 and Z7. Those who like Sony declared the new cameras to be abject failures and their faith in Sony was proven to be a great choice.

Finally, the one guy who truly loves his Fuji declares once again that it's the greatest camera ever conceived.

I have to tell you, I'm tired of this kind of partisan bickering and bloviating. It's boring and doesn't really provide any useful information. If there is one advantage to all of the riot on the Internet, it's taught me who can't be trusted to share information.

Are Dual Card Slots a Requirement for a Professional Camera?

By far, the biggest criticism of the Nikon mirrorless cameras are that they only have one card slot. A “professional” camera must have dual card slots.

The sheer stupidity of these comments really get under my skin, for a couple of reasons.

I'm not opposed to having dual card slots. For many photographers, that second card is an insurance policy in case of corruption. You don't want to tell a client that you missed their favorite wedding moment, or the big moment in a sporting event, or even during a concert, because your card got corrupted.

Not every photographer is an event photographer, though. One person mentioned how important it was during portrait photography to have dual cards while you're tethered to your computer.

I can only guess that he's never actually shot tethered, as the images don't save on your card. They go to the computer. At least that's my experience in both Aperture and Lightroom while shooting tethered.

The horror! You may only have one hard drive. Better make sure there's a second drive to save as you tether shots to your computer.

Check out the Nikon USA Z7 page. Do you see the word “professional” mentioned anywhere? I didn't. It's a camera. You can use it professionally or personally.

How Much Insurance Do You Need?

As I said, dual card slots are insurance in case of the low probability (but still very real) change of a corrupt data card. Yet insurance is essentially a gamble. How much do you invest to reward yourself in the unlikely event that the worst happens? Different people, and businesses, have different tolerances for risk.

My main camera is an older model, a Nikon D800. It has dual card slots, but I've never used the SD card slot in this camera. Never. Not even once just to see how it works.

That's not because I'm unprofessional. It's because I've assessed the risk for the type of photography I do and decided that my CF cards are serving me well.

You may make a different call, that that's fine.

We have cameras on the market with single card slots and others with dual card slots. Buy the one that serves your needs. Risk assessment for card corruption is only one aspect of a camera purchase decision.

Some of the self-appointed pundits declare this is a deal breaker. OK, I'm fine with that. Don't buy the camera and move on to something else.

When these people declare a product dead on arrival because it doesn't have a single feature they deem necessary, it shows you how disingenuous they are about evaluating a product and giving you information that you can use to make your own purchase decision.

Why is Mirrorless Better than a DSLR?

I believe that mirrorless cameras will eventually displace our DSLR bodies, but I'm not worried about it at all. Mostly for two reasons:

Think about it. Can you look at a photograph and tell which camera took the photo? I don't think so.

I can tell you something about the lens. You can determine a bit about a wide angle or telephoto lens. You can evaluate the depth of field. Maybe you can define the sharpness or vignetting on the photo caused by the lens.

Yet I cannot think of a single thing I see in a photograph that tells me if it was taken with a DSLR, a mirrorless camera or an iPhone.

Since we can't tell what kind of camera took a photo, then why do we care so much about a new camera body?

It's only important to the photographer. Most cameras can take absolutely stunning photos in most circumstances. We start to see differences when we evaluate the controls. Some cameras do a better job in high ISO conditions than others. Some have a faster frame rate in burst mode than others.

None of that matters to the person looking at a photo.

Mirrorless cameras may be lighter, but then you have to carry a lot of batteries. The lenses are still heavy.

Are the New Nikon Mirrorless Cameras Going to be Sony Killers?

That was actually a question I heard a few times before the announcement. It cracks me up.

First, let's take a look at these two companies. Nikon makes cameras, lenses and other optical components. Sony makes music, movies, recording equipment, playback equipment and a bunch of other stuff – which happens to include cameras.

There is no way in the world that a much smaller company like Nikon is going to kill either Sony or its camera line. Sony has money to keep developing one new iteration of camera after another, and that's exactly what Sony does.

Nikon got into the full frame mirrorless camera business because Sony could eat its lunch. We've read about a number of Nikon and Canon owners who made the switch to Sony mirrorless. Some love it with Sony, and some switched back because the grass wasn't always greener.

Should You Buy the Nikon Mirrorless Cameras?

Only you can decide.

I say that for a reason, because only you know what you need in a camera. If you don't know that much, then you have to do some research before you buy.

No one can tell you that you should or should not buy the new Nikon mirrorless cameras.

All of the loud voices, angst and hype are pretty selfish.

That's why we won't tell you if this is or isn't a good choice for you. I can tell you that a lot of people disagree with those who said Nikon should curl up and die after releasing these cameras.

So keep that in mind when you listen to folks who tell you that this new line is just crap.

Also, we have an older resource designed to help you evaluate and buy a DSLR. Maybe it will help you with some thoughts about buying a new mirrorless camera, too.

How to Buy the Best DSLR For Your Photography


Thank you for listening to The Photo Flunky Show. Make sure you get every episode by subscribing. 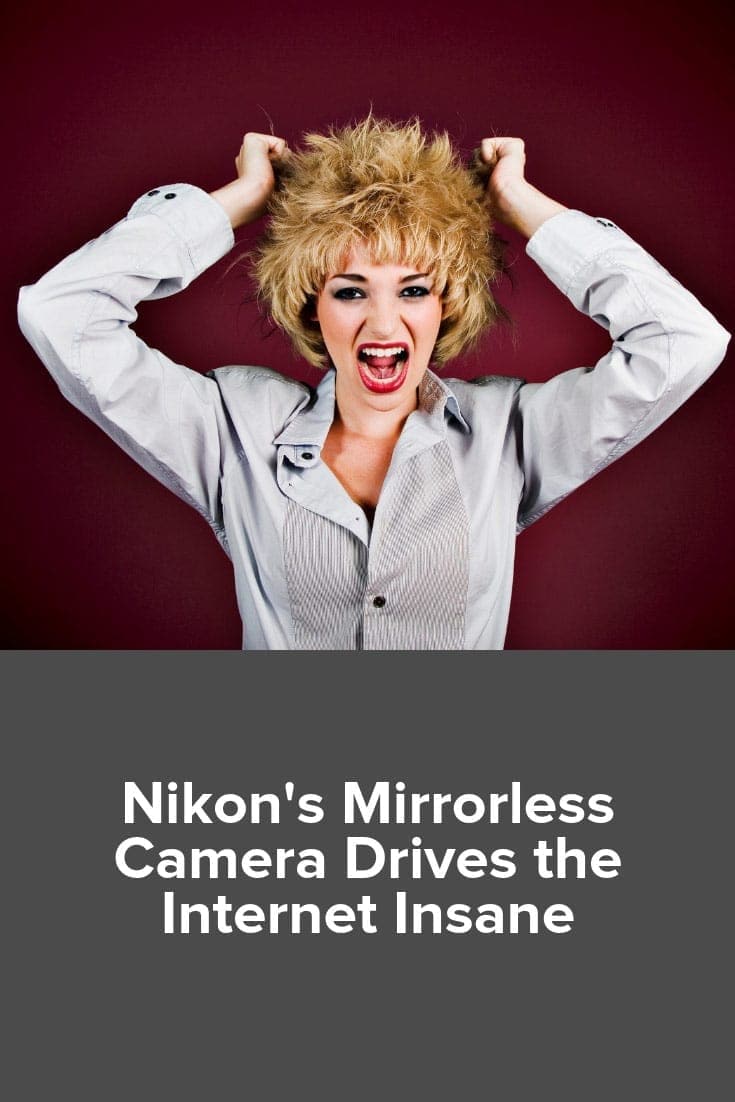